MANY ARE PATIENTLY WAITING for Apple to release the new iPad Pro 2 this year. There has been much talk about all of the special features, price, release date and wireless charging around this new device which we know so little about. When Apple released its first iPad in 2010, it set a whole new trend for technical devices leaving its competitors to produce other leading devices. Will Power PCS wants to give you the latest scoop on the new anticipated iPad Pro 2.

In order for Apple to launch an over-the-top device that will have its audience in awe, they will have to produce the new iPad Pro 2 with the latest hardware and some new special features.

According to Digitimes, Apples new device is said to range in screen sizes from 7.9-10.5 inches. Although, there is talk that Apple might settle with the generally popular screen size in the 10-inch range.

The new tablet is said to have an increase in thickness to 7.5mm, which is reportedly the same as the original iPad Air. The increase in thickness is due to a significant slim down to the bezel. Also, there is talk about a 12.9-inch model that we may see released as well by Apple. The iPad will gain about 0.33mm of thickness once again due to the slimmed down bezel.

Some reports speculate that Apple may remove the home button on the new iPad Pro 2 which may also be seen in the upcoming iPhone models as well.

The Pro models will most likely see faster processors which will make it easier and faster to run apps and use the internet on your new tablet. The 10.5 and 12.9-inch models are expected to be powered by an Apple-designed “A10X” system-on-chip processor. While the 9.7-inch iPad will carry over the A9X processor which we have seen in previous models.

When Apple introduced the new iPhone 7 Plus, they put much emphasis on the new dual-camera configuration which became very popular among consumers. It would only make sense for Apple to carry this new upgrade into the iPad Pro 2 as well.

Therefore, we would also expect to see other similar features like a 3-D Touch display and a Touch ID fingerprint sensor.

According to Digitime,  Apple will release a new A10X chip that will build on the A10 processor which is already being used in the iPhone 7. It is special in that it is Apple’s first chip to combine high-power and low-power cores, which can be activated depending on the difficulty of the task that you are working on.. If it’s an easy task, the low-power cores will handle the hard work, saving battery life as a result.

Another potential upgrade would be a transfer to OLED displays. Currently, Apple uses its regular LCD panels with an LED backlight. OLED displays eliminate the need for a backlight which ultimately reduces power consumption.

There’s also talk of Apple doing away with the home button which would be a dramatic change in display for the new device and that there may be no port for your headphones.

Rumor has it that if the iPad Pro 2 is launched early in the year then it will most likely run the iOS 10 – and that’s not a bad thing. Apple released iOS 10 in September of 2016, displaying the software on its new iPhone 7 and iPhone 7 Plus devices. New features included changes to the lock screen, 3D Touch, and the addition of ‘widget’ support. Apple also added a redesigned interface to Maps, new emoticons for Messages, and a new search system called ‘Memories’ for Photos.

It has been said that if Apple releases the product later in the year, the product will most likely run the new iOS 11 software.

Since there is no scheduled release date for the new iPad Pro 2, we can only speculate as to when the device will be released. Rumor has it that an early March 2017 launch could be expected, although, there has been talk that TSMC, who produces the chips for the device, has been experiencing lower than expected yields which ultimately could  push the release date back to possibly the summer of 2017.

As we all know, these amazing devices do not come cheap and the same is true about repairing an iPad. If your iPad has a cracked screen or if you have accidentally damaged your device; we, at Will Power PCS are here to help fix the problem for you. We eliminate the stress of having to worry about wondering what the exact problem is, we will diagnose your device’s issues for absolutely no cost at all. 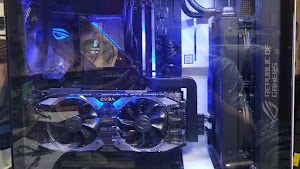 Russell Kraus
13:56 30 Jan 20
Needed someone to upgrade our Business software and hardware including a replacement server and new desktops. Will did a great job with all he knows his business and takes great pride in his work. We highly recommend Will to anyone. Our business is up and running with a smooth transition.

Ed Burrell
21:35 23 Jan 20
Dropped off my PC, said it was a network issue. The tech brought it to my house and had it diagnosed and up and running within 30 minutes. From the time I gave it to them to having it back and running took only about 2 hours. HIGHLY RECOMMENDED. Renaldo was an awesome help. TYVM!

David D
18:17 18 Dec 19
Went in to get some help with a power supply unit. Didn't have a replacement fan but helped me in-store to replace the fan from an old unit I had to fix my current one. Super helpful, very friendly

Slammy Jammy
23:16 17 Oct 19
I went into will power Pc and when I had an issue with my purchase he went out of his way to resolve the problem, making my pc macOS compatible overnight!

Tezzy Bear
03:25 13 Oct 19
Very accommodating and willing to answer any question you have and knows what he is talking about. His prices are very reasonable and tries his best to meet your needs--has done this for me many times.

Patricia Yager
12:30 30 Jul 19
This is the place to do business with. Their service contract includes remote service, which is great, because the issues always arise during non-business hours. We just purchased a new laptop from them, and software was loaded remotely. Will is very knowledgeable and honest. We have been doing business with him for years.

Cornelius Tavarres
12:26 10 Jun 19
Fantastic Experience!Will designed us an awesome website in a timely manner for our new business . The price of the website was very very reasonable and any adjustments that were needed to the website was done immediately. Very very professional guy. I would recommend him to any new or old business that are looking to develop a new website. Awesome job Will. Thank you!!!!!!

Jen Orapello
23:40 06 Jun 19
First of all, Will stayed late the night I was going crazy finding somewhere reliable to drop off my external hard drive (which all of a sudden was no longer functioning). I called up to see how late they were open and he offered to stay a little later (since I was still a bit of a drive away) so that I could drop it off. He took a look the very next day and when he knew he couldn’t replace the part I needed right there in the shop, he assured me that another company he partners with for work like this is also good at what they do. He was right. It took a bit of time because my drive did not cooperate at first, but I am so grateful that I was able to get back all of the important files and photos that I had not yet backed up (lesson learned!). Will always got back to me when I had questions and even reached out again after everything was completed to make sure that I received everything with no trouble. I am very pleased with, and appreciative of, the service I received with Will Power PCs. I definitely recommend them to anyone in need of computer services! Thanks again so much!

david brown
13:32 28 May 19
Will Pitt reached out to me being a business next door. Since, we have done a half dozen projects together & he is by far the most knowledgeable & price friendly person/company I have dealt with within his genre.

Mike DiCocco
23:53 13 May 19
William was patient and quick to help find out what the issue was with my laptop. Very kind and knows his stuff. Would recommend this location if you are having pc issues and need someone to help diagnose and troubleshoot in a timely and professional manner.

Lois Smith
21:01 25 Apr 19
had a GREAT experience with Will Power PC........very helpful, knowledgeable, and professional. Solved all my issues. Highly recommended.

Dwain Sonnier
01:59 10 Apr 19
Having just moved to the area and not knowing anyone to recommend a computer repair shop, I went to the web and am very pleased to have found Mr. Pitt. This being my 9th corporate move I must say so far this business experience has been the best for me. He is available 7 days a week and when not with another customer can sign on to your home computer and take care of your urgent needs. For the years of experience he brings to the table, his rates are very appropriate for the high quality work you receive. In fact I was so satisfied with my personal computer, I had him to do some work for the company I work for. I will say, I haven't tried any other computer service in the this area and I will also say I won't. If you have any computer issues, here is the place to take those issues as they are in good hands!

John Fleury
22:12 08 Apr 19
William set up all of our office networking equipment and security for our new location. He is extremely responsive and did an awesome job to make sure our network was operational on our targeted live date. He is highly recommended!

Steve B
19:07 25 Feb 19
Outstanding service!!! My older HP Pavilion p6 desktop computer would turn on but not boot up. Will thoroughly checked it out and made all the necessary repairs. I picked up my computer the same day and it works great!!! Will Power PCs is fast, efficient, thorough, and repairs are reasonably priced. Thanks again Will.

Glenn
22:20 11 Jan 18
If you are having computer problems this is the place to go. Had repairs done quickly and at a reasonable price. Everyone was friendly and helpful and I picked up a couple good suggestions.

xScurvy
17:22 03 Jan 18
I had an issue with a brand new computer. Will opened his shop on New Years Day just so I could drop it off! A few hours later I received a phone call, the problem was solved! I didn’t expect to hear back for a few days. Will is fast and efficient.

Shayla Tucker
21:02 02 Jan 18
Excellent customer service! Quickly ordered in the screen I needed to repair my laptop, and had my laptop repaired and returned back to me within an hour of my dropping it off. Thanks so very much!

stephanie roy
13:44 30 Dec 17
Will most certainly will be my computer specialist from now on. He does fast and very efficient work. My computer is now running like new. His prices are also very reasonable. I have another computer I will be him fix. Needless to say I am a very happy customer.

Dale Hanson
22:01 12 Dec 17
William was really helpful towards solving the problems I had. I have a custom desktop and he was able to diagnose my problems and find a solution that didn't require any additional parts. It only took him about 20 minutes to solve the issue too! He was polite when I made silly IT mistakes and even helped me root cause with an additional issue for no extra charge. If I have more issues I will definitely return here.

Jaime
00:25 04 Oct 16
Excellent service. My problem was resolved in a very timely manner. Pricing was reasonable and staff is friendly and knowledgeable. I recommend Will Power to anyone who needs IT service.
Next Reviews
Copyright 2018. WillPowerPcs